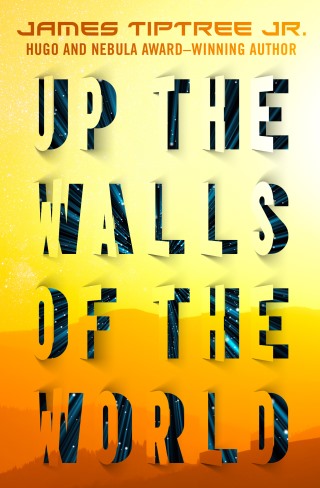 Up the Walls of the World

The first novel from the award-winning author of Brightness Falls from the Air, a writer “known for gender-bending, boundary-pushing work” (Tor.com).

Up the Walls of the World is the 1978 debut novel of Alice Sheldon, who had built her reputation with the acclaimed short stories she published under the name James Tiptree Jr. A singular representation of American science fiction in its prime, Tiptree’s first novel expanded on the themes she addressed in her short fiction. “From telepathy to cosmology, from densely conceived psychological narrative to the broadest of sense-of-wonder revelations, the novel is something of a tour de force” (The Science Fiction Encyclopedia).

Known as the Destroyer, a self-aware leviathan roams through space gobbling up star systems. In its path is the planet Tyree, populated by telepathic wind-dwelling aliens who are facing extinction. Meanwhile on Earth, people burdened with psi powers are part of a secret military experiment run by a drug-addicted doctor struggling with his own grief. These vulnerable humans soon become the target of the Tyrenni, whose only hope of survival is to take over their bodies and minds—an unspeakable crime in any other period of the aliens’ history . . .

“[Tiptree] can show you the human in the alien and the alien in the human and make both utterly real.” —The Washington Post

“Novels that deal with the mental gymnastics of superminds, or with concepts like eternity and infinity, are doomed to fall short of the mark. But Tiptree’s misses are more exciting than the bulls‐eyes of less ambitious authors.” —The New York Times

James Tiptree:
James Tiptree Jr. was the pseudonym of the late Alice Sheldon. An ex-CIA employee, Sheldon had the honor of being known as one of the best science fiction writers of the twentieth century. Among her novels, Brightness Falls From the Air is considered the most engaging.